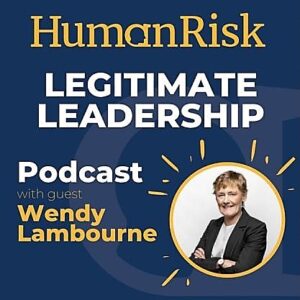 In the podcast Wendy set out the origins and basic tenets of Legitimate Leadership. Below is our summary of what she said.

In the early 1990s, things were not going well in this factory. It had suffered two explosions, resulting in 14 fatalities. The explosives company had shortly before this been taken over by UK chemicals company ICI. ICI told the management of the explosives factory, ‘We don’t care that you have 87% of the explosives market in South Africa, we don’t kill people. So fix the problem or we will close you down.’

So management looked for something that would be a golden thread to which they could revert for guidance on leadership. They found the framework upon which Legitimate Leadership is based.

Three years later the factory was acknowledged to be the safest explosives factory in the world.

Management had moved from a place called ’this is how not to lead’ to a different way of leading people that would bring about transformation in people and ultimately also in the results.

The fact that management was the problem because of poor leadership was blatantly obvious from the safety record. Better leadership was also needed generally. These were the dying days of apartheid in South Africa. Black workers gained ‘industrial freedom’ through their unions before they gained political freedom under Nelson Mandela. Industry was the theatre in which revolution largely took place, and management’s relationship with employees was fraught. It wasn’t easy to manage this conflict situation. Management had to change ‘us’ because they certainly could not change ‘them’.

The framework for change originated in South Africa – it derived from research in the gold mining industry, which at the time was also beset by conflict and strikes. Research had been done for the Chamber of Mines, the employers organisation, on 70,000 mine workers.

The researchers were asked to find out how to predict that strikes would arise and, if possible, how management could act to avoid strikes. The researchers started from the presumption that the health of a relationship could be determined by the degree of trust in it.

So they asked the mineworkers to rate their level of trust in their managements. The expectation was that scores would be zero and below. That was so in many cases, but in some mines or shafts there was found to be considerable trust – even though this was pre-democratic South Africa.

The question for the researchers then was, ‘What accounts for trust?’

Then the mineworkers were asked, ‘Has trust in management changed?’ That is where the key answer came: people said trust increased if they were convinced that management had a genuine concern with their wellbeing. And management could not tell them that it had a genuine concern for their wellbeing, they (the mineworkers) had to make that judgement. And the rule that was used by them to make that judgement was, ‘When we come to you with our concerns do you suspend your agenda for ours? Do you listen to what we are saying and do you do your best to address it?’

So, the word which emerged, and which is the basis of the Legitimate Leadership Framework was: intent. Leaders stand or fall on the basis of intent or motive – whether they are in the relationship to give something to their people or to get something out of them.

But commonly, managers are measured on, and believe their purpose to be, ‘to get results out of people’. And that is what they are rewarded for.

So commonly, management are seen as being takers.

So the next research question was, ‘What kind of person would you work for willingly?’

The above question has been asked since then of thousands of people who Legitimate Leadership has dealt with. Across the board the answer has been consistently, ‘I will work willingly for someone who cares for me as a human being (not a human resource) and who grows me.’

Why is this the universal answer? Care and growth are human needs but they are also what make any authority or leader legitimate. The first relationship of power or authority is that of a parent. Then there are relationships of power like the teacher, the manager or the government.

These people of power should all be in the relationship to give to their people, not get from them. And what they should give to people is care and growth.

The essence of the Legitimate Leadership Framework is understanding what accounts for trust in management, and enabling people in leadership positions to gain or regain legitimacy.

Many people would say, ’I have power because I have been appointed or elected’. But Legitimate Leadership makes a clear distinction between authority and power. You have authority when it is vested in your position. But you are only really powerful when your people trust you and are loyal to you. Employees give you power or withhold it from you.

That is what we realised 30 years ago – that we only have power to the extent that our people give it to us. And we cannot buy it, we have to earn it.

Managers are not elected, they are appointed. With politicians in democracies, the elected person leaves if voted out. But does the employee leave the manager when trust dissipates? Yes s/he does, if it suits them; if it does not suit them, they stay but withhold their willingness. And without willingness, the manager has control but not power.

All things being equal, a group of motivated people outperforms a group of unmotivated people. That is the challenge of leadership. Engagement surveys do not paint a pretty picture – everywhere, the number of people truly engaged at work is disappointing.

Intent is about behaviour, not motive. You cannot see intent but you can deduce it. People submit willingly to the surgeon’s knife but not to the robber’s knife. This is because the surgeon is cutting you for your own interest, so we trust him or her.

So the knife-wielder does not have to be nice; provided s/he is acting in the person’s best interest, s/he will be trusted. S/he can be anything but nice but s/he needs to pass the intent test. S/he does that only when they put their people’s interests before their own.

In business, dramatic incidents occasionally happen and if leaders handle them well, their people will thereafter walk through fire for them. Or the opposite.

But normally, trust is about daily indications. For instance, a boss from hell takes the credit when things go well; there is an appointment to be made and s/he goes for the tried-and-trusted hand rather than risking their reputation on a younger possibility; when the employee has a great offer from outside, s/he does not leave with their blessing, but they match the offer.

Leaders give themselves away continuously by the choices they make.

At the start of the Covid pandemic, Legitimate Leadership surveyed about 300 employees in some of its client organisations.

And secondly what had happened to trust?

There was the expected correlation.

The pandemic gave management an opportunity to demonstrate their intent to their people.

Whether a supervisor or a CEO, you have to continually make choices between, ‘Do I do this right or do I do the expedient thing?’

So, people trust people who:

There have always been, and there continue to be, givers and takers at every level in organisations.

You cannot hand over control and still have control. There’s always a risk. Which is why Legitimate Leadership is difficult to do. Empowerment is difficult because you have to give up control of outcome.

Legitimate Leadership’s process begins with a two-day session in which we argue that this model is a better way of leading people than conventional command-and-control. In this debate the question always arises, ‘Who needs to make the shift first?’

Everyone howls in agreement, ‘The person at the top needs to change first’. The subtext is ‘… and until they do that, there is nothing I can do about the problem.’ In fact, the choice is one that you alone should make. It is definitely helpful if the person above you does this and if the board does it. But if not, you can still do it.

There’s always a decision between, ‘When do I hold on and when do I let go or delegate’. We don’t argue for a change in style or behaviour, but a change in heart.

There are two qualities that this framework tries to unleash on people: compassion and courage. Both of those sit in the heart.

To return to the explosives factory. The CEO was asked what the application of these ideas had done for the factory. He replied that it had brought about a radical and sustainable improvement in its safety performance and other KPIs. But in essence, he said, it unleashed a spirit of generosity and courage in its people ‘that we had not thought possible’.

Legitimate Leadership’s view is that because we are human we are absolutely capable of opposites: courage and generosity or greed and fear. Greed and fear is dominant in many organisations.

Which of these two sets of qualities dominates in an organisation is a function of how people are led. Leaders carry an enormous responsibility because of the impact they have.

When you have an intent to give rather than to take, this touches everything. It shifts what you give time and attention to; how you structure your organisation; your performance management system and your disciplinary and reward systems, etc.

If I am in the relationship to give to you, how do I know what will enable you to contribute and grow? I can only ascertain that by watching your game, which is a ‘practice’ of this framework.

In a Legitimate Leadership process spanning 12-15 months, people develop confidence and competence in translating their intent shift into practice. The process starts with the two-day session described. After that probably 70-80% of people say, ‘Okay I’m sufficiently convinced to give this a go.’

But the second question is to ask how aligned people are already to this approach?

So we survey their people based on Legitimate Leadership criteria. The results show how aligned the leader is and where he or she needs to change. Then over 12-15 months, on a drip-feed basis, Legitimate Leadership takes leadership aspects and looks at them in modules – for instance ‘holding people accountable’; ‘spending time appropriately’; ‘empowering people’; ‘watching the game’. We workshop how to do one of those and people go away and try it before workshopping it again. Then we proceed to the next one.

People start holding other people accountable for doing this during the process. Not everyone does it. But eventually, it is observed that the people in the organisation ‘are different … and the results are getting better’.

How does this compare to servant leadership? Legitimate Leadership is consistent with servant leadership because it also says leaders are here to serve the people, not the other way round. But this framework also asks how to be more concrete about defining what the serve/give is – in other words, care and growth. And what the criteria are for delivering on care and growth.

Listen to the podcast here 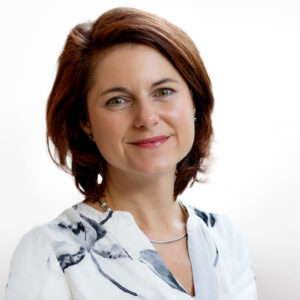 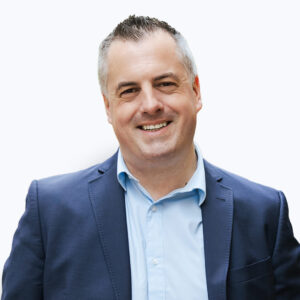