May 13, 2020 - By Simon Sinek, American author on leadership and motivational speaker, speaking during a recent company huddle of his staff.
Share by Email

A crisis confronts leaders with their past deeds. Those who have put money aside, rather than taking it out in short-term incentives, will obviously be in a stronger position. Leaders who have been here to “give” to the people in the past are more likely to have employees who pick up the oars and help to row the boat through choppy waters. Those who have historically been “takers” should not be surprised if their people give little, if at all, and may even rebel or jump ship. A crisis as an opportunity to reset the relationship with employees – to take the relationship to new heights. It is also an opportunity to reinvent the business – not the Why of the business but the What and the How. This will be easier in some industries than others. But the losers, irrespective of their industries, will be those who don’t at least try to adapt to the change, who lack the will to seek and find another way.

OUR SUMMARY OF THIS VIDEO: I have recently been pushed to explain how the infinite mindset helps in times like these. A finite game has known players, fixed rules and agreed-upon objectives. By contrast, rules are changeable in the infinite game, with unknown players who are in it to keep playing. Problems arise when finite players are up against infinite players. Often the former end up mired in lost trust and declining innovation.

These are not unprecedented times. There are many famous cases where change or unexpected events has put companies out of business – and made other companies come out stronger and reinvent themselves.

This crisis is something new, sudden, shocking – absolutely. But this is not unprecedented in the business world and so it is for us to say not “how do we do what we’re doing?” but rather “how will we do what we’re doing in a different world?” It is the companies that have been investing and have had an infinite mindset for a long time that will come out of this stronger because they’re prepared. Some of them were saving money as opposed to giving out huge bonuses and spending all the money; and the will of their people is high to figure out a way through it.

The ones that are struggling the most are the ones that spend all their money, save nothing, to appease Wall Street; and the will of their people is low. Their people are in survival mode rather than reinvention mode.

I feel so optimistic (for this team) because we’re thinking about the future. We’re in a dark tunnel now but there’s a light over there. I don’t know how far away that light is but I can see it.

When we come out we will have a better train, a different train. We will be a completely different business, some of us will have different jobs.

And that’s our opportunity the opportunity is what we will be – not “how do we do preserve what we had”. That’s an infinite mindset.

We’re not allowing Uber to put us out of business. We’ll reinvent ourselves.

If you think you’re going to do the same job and you’re waiting for this to pass, then I got some bad news. That that ship has sailed.

This is a huge wake-up call for us. We had the luxury of being lazy – not in a bad way, there was no reason to reinvent when drinking from a firehose. But now the opportunity is magical. I’m thinking, “How do I put myself out there without a stage. This is entirely new for me as well. But I’m not worried about what I do. I’m worried about why I do it and I will find a job that helps me do that, make a job that helps me do that, and expect the same of everyone.

The Most Important Characteristic Of A Leader

Who You Should Do Business With

The Shiny Eyes Definition Of Success 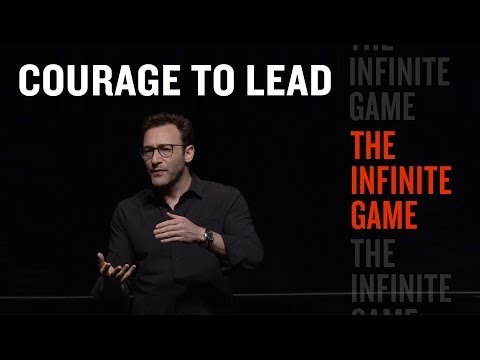